In this post I want to show how I found four vulnerabilities in users of the jwtk/jjwt library using CodeQL.

I start with a short section about what a JWT is, what CodeQL is, and finally I explain the query I used to find the vulnerabilities.

What Are JSON Web Tokens?

JWTs are based on the JSON format. They are used to exchange content (“payload”) that can be signed, encrypted or both. They can also be neither which makes hackers and bounty-hunters happy :P

A JWT consists of three parts:

After base64 encoding and signature generation it will look like this:
eyJhbGciOiAiSFMyNTYiLCJ0eXAiOiAiSldUIn0.eyJzdWIiOiAiMTIzNDU2Nzg5MCIsICJhZG1pbiI6IHRydWV9.fnsXsSs-1a0LUpQ6gEM6eFsadLQgYNNCaYMgWbG74Mo

The Problem with JWTs

With the structure explained, let’s get to the problem with JWTs. As I said, they can be used to exchange “content”, but they are usually not used for ordinary “content” but for authentication information!

So if a user logs into a service using their credentials, the server will create a signed JWT (using their secret key) which is sent back to the user. A user will then have to only show their JWT as proof of authorization and if the signature is correct, the server will give access to the protected resources.

All proof that the user should have access to the service is only stored in the JWT which makes it critical that the user can not change the token and that the server correctly verifies the signature of the JWT.

This is the problem! If we can forge a token, we don’t need the password of the user, a 2FA token, or anything else from the user! If the server accepts our forged token as valid it’s usually game-over for security.

And sadly, JWTs are notorious for being used insecurely 1234. 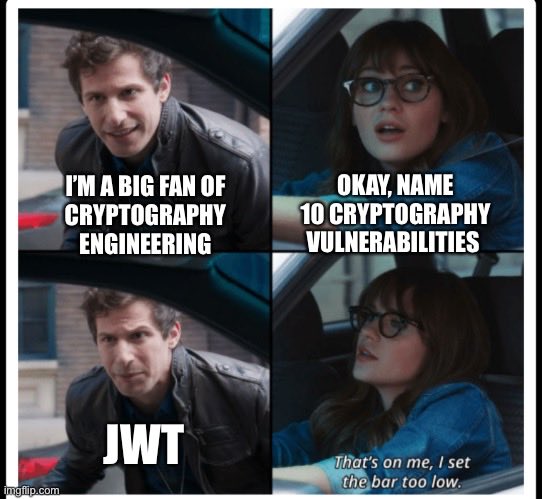 CodeQL is a static analysis tool that has been developed by Semmle - now @ Github.

It can be used both for (targeted) variant analysis and also (less targeted) analysis of entire bug classes like XSS, SSRF, and many more.

CodeQL has a simple but powerful, logical query language. Let’s look at a simple CodeQL query for Java:

In our query we first have to import the Java specific CodeQL libraries. We then define what we want in the from part:
All combinations of if statements and blocks.
In the where part we specify that we are only interested in those if statements whose then block is the same as the block from the from clause and the then block has to have zero statements in it.
The select clause will then create an alert with the message “This ‘if’ statement is redundant.” at the location of the ifstatement.

Finding Insecure JWT Validation in Users of The jwtk/jjwt Library.

jwtk/jjwt is a popular Java library for working with JWTs.

It offers not 1, not 2, but 6 different methods to parse a JWT! The most problematic method is this parse method:

Parses the specified compact serialized JWT string based on the builder’s current configuration state and returns the resulting JWT or JWS instance.

SignatureException - if a JWS signature was discovered, but could not be verified. JWTs that fail signature validation should not be trusted and should be discarded.

Looking at the Javadoc this is safe, right?

SignatureException - if a JWS signature was discovered, but could not be verified.

So code like this should be perfectly safe, right?

Sadly it isn’t. If we pass a JWT in the header.payload.signature format it will correctly verify the signature and throw an exception if the signature doesn’t match. But if we pass header.payload. it happily ignores the missing signature, because a JWT seems to be valid with an empty signature. Even if in almost all cases what we want is a signed JWT (Known as a JWS)!

When writing a query it’s very helpful to verbalize the query:

We want to find all calls to the parse method of JwtParser. But only on parsers that have a signing key set (for example, if you - as a user/client - only want to know whether a token has expired it usually doesn’t matter whether it is correctly signed) to reduce false-positives. Reducing false-positives is very important in static analysis because nobody likes alerts that are wrong.

We can directly translate this into a CodeQL from clause:
from JwtParserInsecureParseMethodAccess ma, JwtParserWithSigningKeyExpr parserExpr
ma are all calls to insecure parse methods of JwtParser and parserExpr are all parsers for which a signing key has been set!

Our where clause then only has to ensure that we are calling the insecure method on the signed parser:
where ma.getQualifier() = parserExpr

The select clause then adds a message at the location of the parse method and also references where a signing key has been set:
select ma, "A signing key is set $@, but the signature is not verified.", parserExpr.getSigningMethodAccess(), "here"

The rest of the query contains a little bit of boilerplate to make the query better structured and reusable.

(The full query can be found here)

(Some parts of the query are shown simplified)

This models all methods (#1) that have the name parse (#2), have exactly one parameter (#3) and are declared in the type JwtParser (#4). Finding all calls to these methods is then as simple as declaring a class that extends MethodAccess (#5) and requiring that the accessed method (#6) is an instance of the JwtParserInsecureParseMethod class we defined above:

For the JwtParserWithSigningKeyExpr class we have to determine whether a JwtParser expressions has a signing key set or not. For this we use our all-purpose tool, data-flow analysis!

We first have to tell CodeQL what we are “interested in”. In our case we want to track the flow from all method calls that set a signing key (#7) to all expressions that call the parse method (#8) on an expressions with a set signing key.
We also have to tell CodeQL about additional ways data can flow (#9) because the jwtk/jjwtlibrary uses a fluent interface which is (currently) not modeled by default.

In the JwtParserWithSigningKeyExpr class we then have to check whether the expression really is a JwtParser (#10) and whether there is any flow from a method call that sets a signing key (signingMa) to the this expression (#11) using the configuration SigningToInsecureMethodAccessDataFlow defined above.

This is the core of the query. The whole query has 200 lines including additional metadata, docs, and some modeling of similar yet rarely used methods.